It’s controversial in some circles and may be a political can of worms, but random drug testing – whether it is on our roads or in our workplaces – saves lives.

According to The Daily Advertiser, police in Wagga have reduced and perhaps even stopped mobile random drug testing on roadsides. The article claims the decision is due to what it calls “left-wing political pressures” after the NSW Greens criticised the random drug testing on our roads and described drug use as a medical rather than criminal concern.

In Wagga, 150 roadside random drug tests were conducted in a single week in 2016, while the number for the entire 2017 so far is only 225. There have been 14 positive drug tests so far this year, a drop of more than 80% on figures for the same period last year. Over Easter, a key period for road safety, no random drug testing was carried out.

Does random drug testing on our roads save lives?

The premise for conducting random drug testing is to keep those who are affected by drugs off our roads. And for good reason.

If you’re affected by a drug such as cannabis, your reactions will be slower than normal, your perception of distance and time can be reduced, and you may feel drowsy and have trouble concentrating. If you’re affected by a stimulant, such as ecstasy, cocaine or ICE, you may be aggressive and willing to take more risks, you may have blurry vision, have trouble with concentration and may even have hallucinations.

Do we want people with these types of symptoms driving cars, motorbikes, trucks or buses on our roads? Clearly not.

Drug driving is a serious road issue – 41 per cent of drivers and motorcyclists killed on Victorian roads alone in the past 5 years have had drugs in their system.

That’s why random drug testing on our roads can help to save lives.

Random drug testing in our workplace

The message is the same in workplaces. We don’t want people who are having issues with alertness, vision, physical coordination, reactions and the ability to make decisions on our roads, and we don’t want them in our workplaces either.

For more information on the importance of random drug testing in workplaces, see the workplace drug testing page on our website or give Integrity Sampling a call on 1300 SALIVA (1300 725 482). 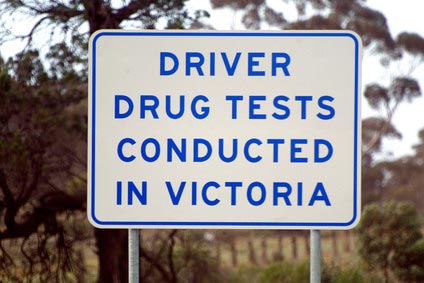