If you’ve ever been stopped on a Brisbane road for drug testing, you’ll know at least a little about saliva testing methods. You’ll know that it’s easy and quick, which, unless you record a positive saliva test, makes the process reasonably painless. If your workplace conducts drug testing you may also have experienced saliva testing at work. So is there a difference?

The testing process is, as the website says, simple and painless. You simply rub a collection device inside your mouth for a short period. This sample is then placed in the portable testing unit (see below) and a short time later you’ll be free to go. As long as your result is negative, of course.

If you record a positive saliva testing result, you’ll undergo secondary saliva testing. If this result is positive, you’ll have your licence suspended for 24 hours and the remainder of your saliva sample will be sent to a laboratory for analysis. It’s this sample and laboratory test that determines whether a driver will be charged with drug driving.

Note: As highlighted on the Queensland Police website, if you’re suspected of being impaired by any drug, not just THC, ICE or MDMA, a driver may be required to provide a specimen of blood for analysis.

The process for saliva testing in Brisbane workplaces is very similar. Like on Brisbane roads, the saliva drug testing process is quick, easy and painless. The major difference is the types of drugs that saliva testing may be looking for.

When conducting saliva testing in Brisbane, Queensland and other workplaces, Integrity Sampling is testing for several drugs, not just three. The additional drugs are amphetamines, cocaine and opiates, as well as THC, methamphetamines and MDMA.

Another thing that Integrity Sampling and Queensland Police have in common is the testing unit that is used to analyse saliva samples.

See our Drager Equipment page on our website for more information about the Drager 5000. 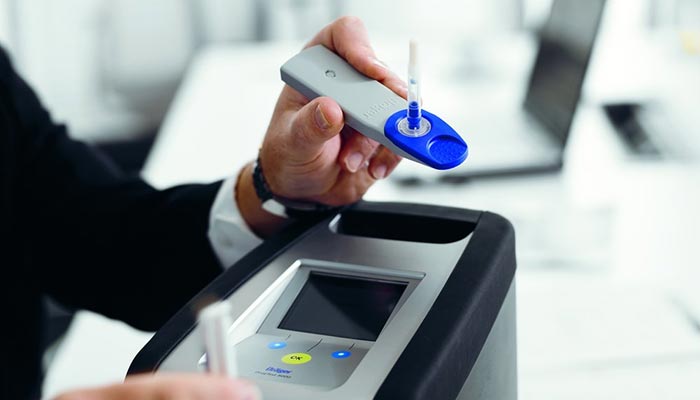